This is an area many trainers do not like to get involved in. It can get personal, and people can be very dogmatic about their foods. So what I am going to do here is talk about the foods I eat and some of the experiences which led me to the diet which I thrive on today. I fully expect to learn more as time passes and so this blog topic will grow as I do.

I am not going to try to make the argument that there is one perfect diet for the entire Human Race. Each of us has to find our own way given our options, tastes, goals, genetics and ethics.

I began making decisions about my diet in my early twenties. I was a music student living in New York, and I decided to quit eating red meat and poultry (which was served in abundance in the home where I was raised.) A complexion problem which had bothered me during high school cleared up right away, and I felt I was on a good track. I did a lot of carb loading before climbs, runs or bike rides. My athletic performance was excellent. I stuck with this pattern of grains and pastas, veggies and fruit, eggs, fish, and dairy and fish for a long time.

Fast forward almost twenty years. My diet remained unchanged except for the addition of occasional chicken or turkey. I knew nothing about organic foods, rarely cooked for myself and ate in restaurants frequently. I was climbing hard and a lot, and was beginning to have joint pain in my shoulders, fingers and feet. Someone gave me a copy of “Eating Right for Your Type,” by Dr. D’Adamo. Following his advice for my type O system, I cut back substantially on wheat and grains, especially pastas. I was amazed that the pain I had been having went away entirely. So I was living on veggies and fruit, dairy, eggs, fish and chicken (and since I was eating out a lot I had no idea what kinds of oils, sugars and so forth I was consuming.)

Then came an injury, a badly shattered wrist. Surgery went well, but two months into the healing process it was apparent that I had stalled out. My doctor asked me about my diet, and suggested strongly that I eat some meat. I didn’t want to go there, and did not really pay attention. But then I was walking past the meat counter at the market and something bizarre happened. The meat really looked good. I was standing there staring at the steaks, and it was like they were talking to me… “Eat me… eat me…” I explained my situation to the butcher, asking for his recommendation for a person who has not eaten meat in a very long time. I took home a few thin slices of “all natural” London Broil. It was great! I cannot prove the connection, but as I ate more meat my wrist healed well.

Gradually I became more interested in quality ingredients and cooked more for myself. In 2004 I moved in with my companion (and soon to be wife) Barbara, and took up the cooking duties in our home. We are both very motivated to be fit and healthy and so food is a constant topic. Barbara bought Mark Sisson’s book The Primal Blueprint and I have been following this diet closely for several years now. Pushing the carbs down to <100 grams / day took about a week for me to adapt to. Then, suddenly my energy came back without the ups and downs I tended to have before. My energy used to fluctuate a lot, and if I felt even slight hunger I would have to eat right then or bonk. Now, after a few years of eating Primal I’m much more stable. So going along with the basic diet outlined in the graphic below, we have a few rules about our food in this house. No processed foods. No refined sugars. Beef is pasture raised organic (no corn fed hormone and antibiotic feed lot meat.) All other meats are organic. Chicken is free range organic.  Fish is wild. I eat a lot of can salmon, sardines and stuff like that, Barbara not so much. As much as possible all the fruits and veggies are organic.

I like cooking batches of food, enough for the two of us for a few days. The slow cooker is great for this, so are meatloaves and that sort of thing. I’ll start blogging some recipes here that are not labor intensive, are nutritious and taste good (to me at least.)

Click the image below to take a closer look at the Primal Diet food triangle: 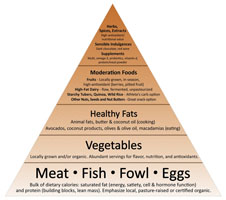