Located at 8000 feet above sea level, high above and just north of the great canyon of the North Fork of the Kings River, Courtright is in the Sierra National Forest south of Yosemite and north of Sequoia / Kings Canyon National Parks. The reservoir is part of a pumped storage power generation project, an arrangement where water is pumped uphill 2000 feet from Wishon Reservoir during off peak hours using excess available inexpensive power, and then re-used to make power during high priced peak demand periods.

The climbing at Courtright is often compared to Yosemite’s high country, Tuolomne Meadows.  At first glance there are similarities, but Courtright is much more than a miniature Tuolomne. Where the rock in The Meadows often features unique knobs for holds, Courtright’s beautiful granite is known for thin edges and holes called solution pockets. 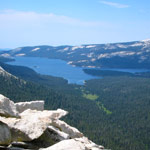 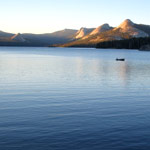 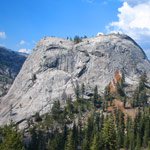 Smiladon is a challenging one pitch climb on a cliff called the Tiger Wall, after the rock’s striking orange and black streaks. The grade of the climb is 5.12c, the first ascent was done in about 1989 by Erik Eriksson, Ron Carson, Scott Loomis and Brian Jonas, a very strong group of climbers. The first time I set eyes on this brilliant route I knew I had to do it, and I began to train specifically for this event. One day when I was ready I bumped into my friends Bev and Bill up there. Bev belayed as I climbed, and Bill took pictures and gave me the roll. 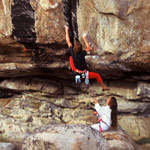 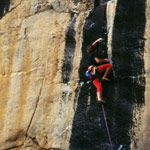 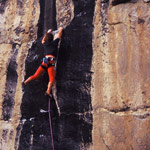 I made my first trips up to Courtright in the mid 1980s. I began by climbing a lot of the classic routes like Esto Power on Power Dome and Wardance on Trapper Dome. But everywhere I looked I saw opportunities to establish new lines, and after I got to know the area pretty well I picked my first gem, a thin seam at the very west end of the main south face of Voyager Rock. This climb, done in 1988, came in at about 5.12a/b, and my partner Julie Lazar came up with the perfect name: Seamstress. The next year I did By Jupiter, There are Rings Around Uranus with Herb Laeger and in 1990 the power slab called The Gold Standard, a 5.12c, with Jan McCollum and Guy Keesee. There were a host of other new routes as well but those are the highlights. 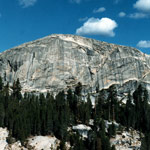 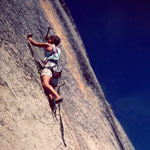 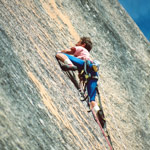 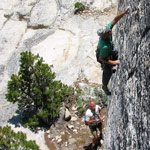 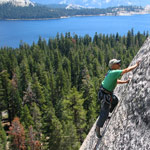 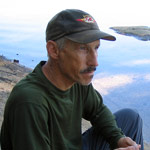 The Carson Kodas Arete is a Courtright classic. The route was first climbed by Ron Carson and Vaino Kodas in 1987. I was lucky to be there to witness the first ascent, and I was astounded to see these two legendary climbers make easy work of this clean, bold aesthetic line. It would be several years before I would feel up to doing an ascent myself. When I did, my partner was my experienced and reliable friend Guy Keesee. This is a run-out and committing climb and I wanted a belayer I could count on in a pinch.

More info on this climb and others at Courtright can be found at MountainProject.com 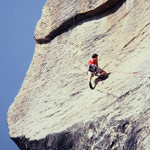 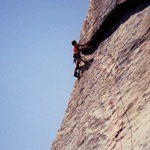 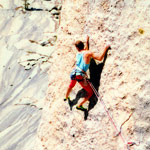