This recipe can be made with pork or beef. It takes some work to put it all together, but it’s one of my favorites for a special occasion. This is a modified version of a recipe from Mastering the Art of French Cooking by Julia Childs.

Peel, seed, and chop the tomatoes: 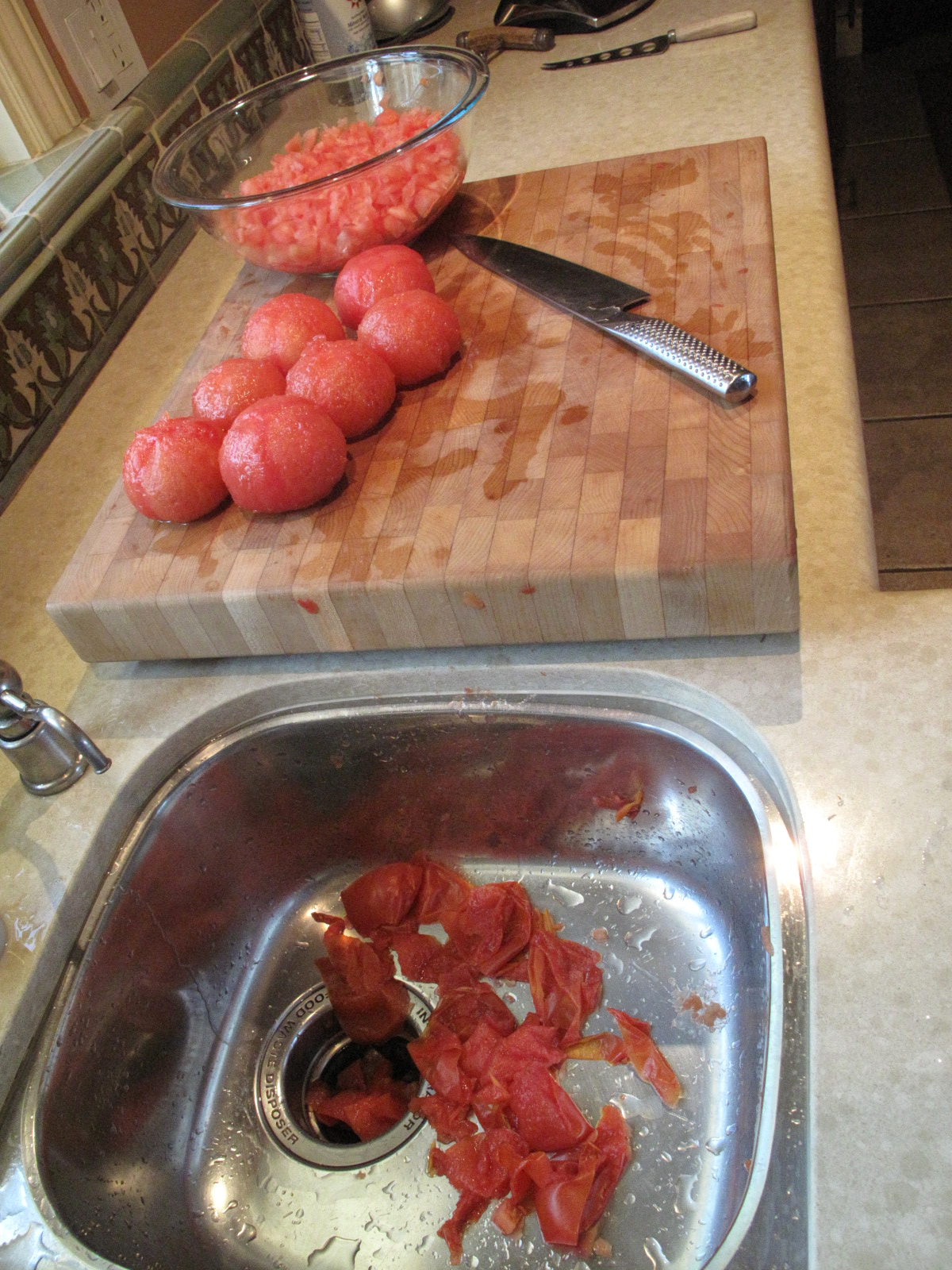 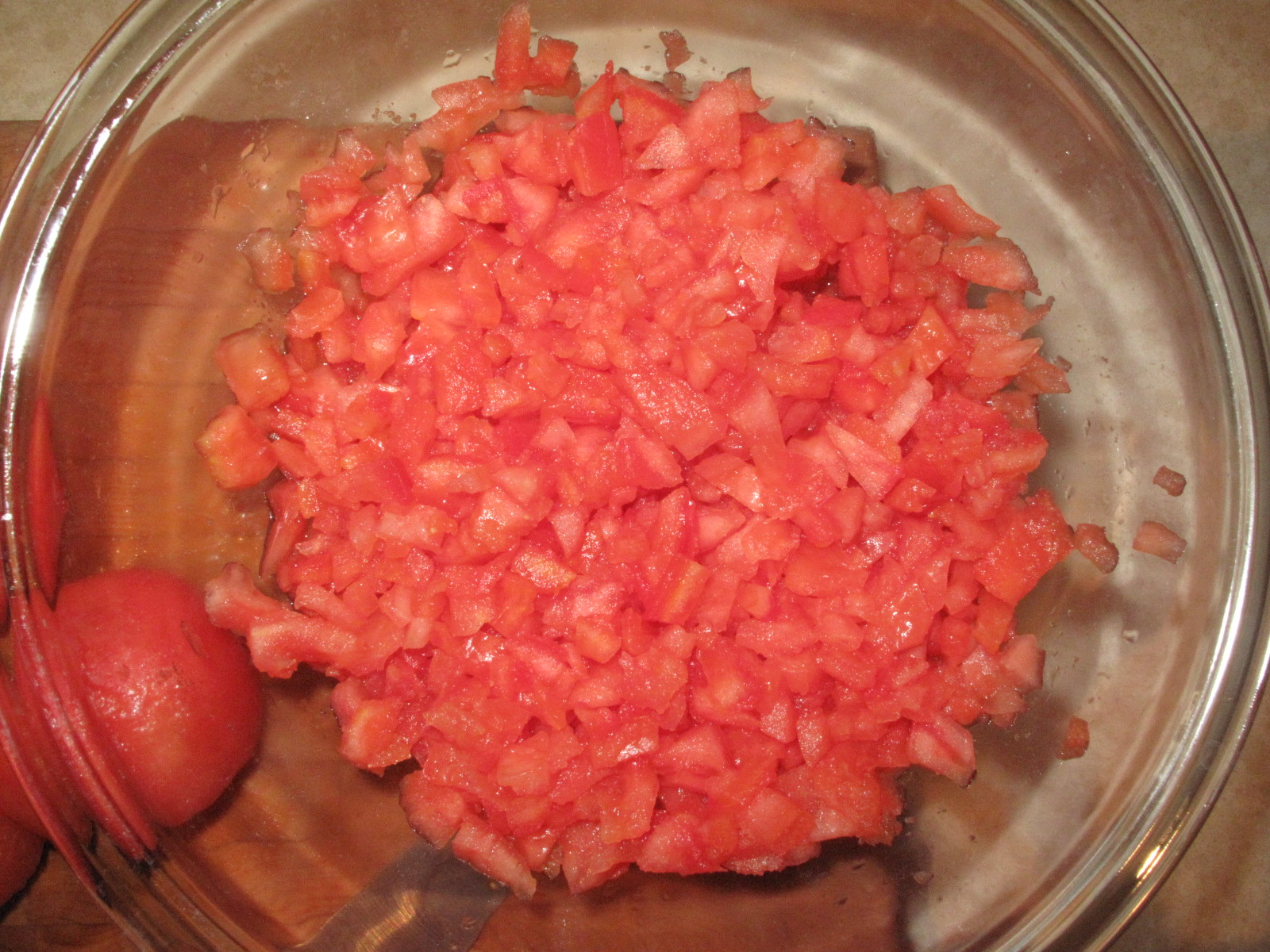 Trim and cut up the pork into 1.5″ cubes. For most recipes I’ll choose fattier meat and not trim it, but for this one I like to use the loin roast and trim it. We’ll render the fat out of the trimmings for future use. 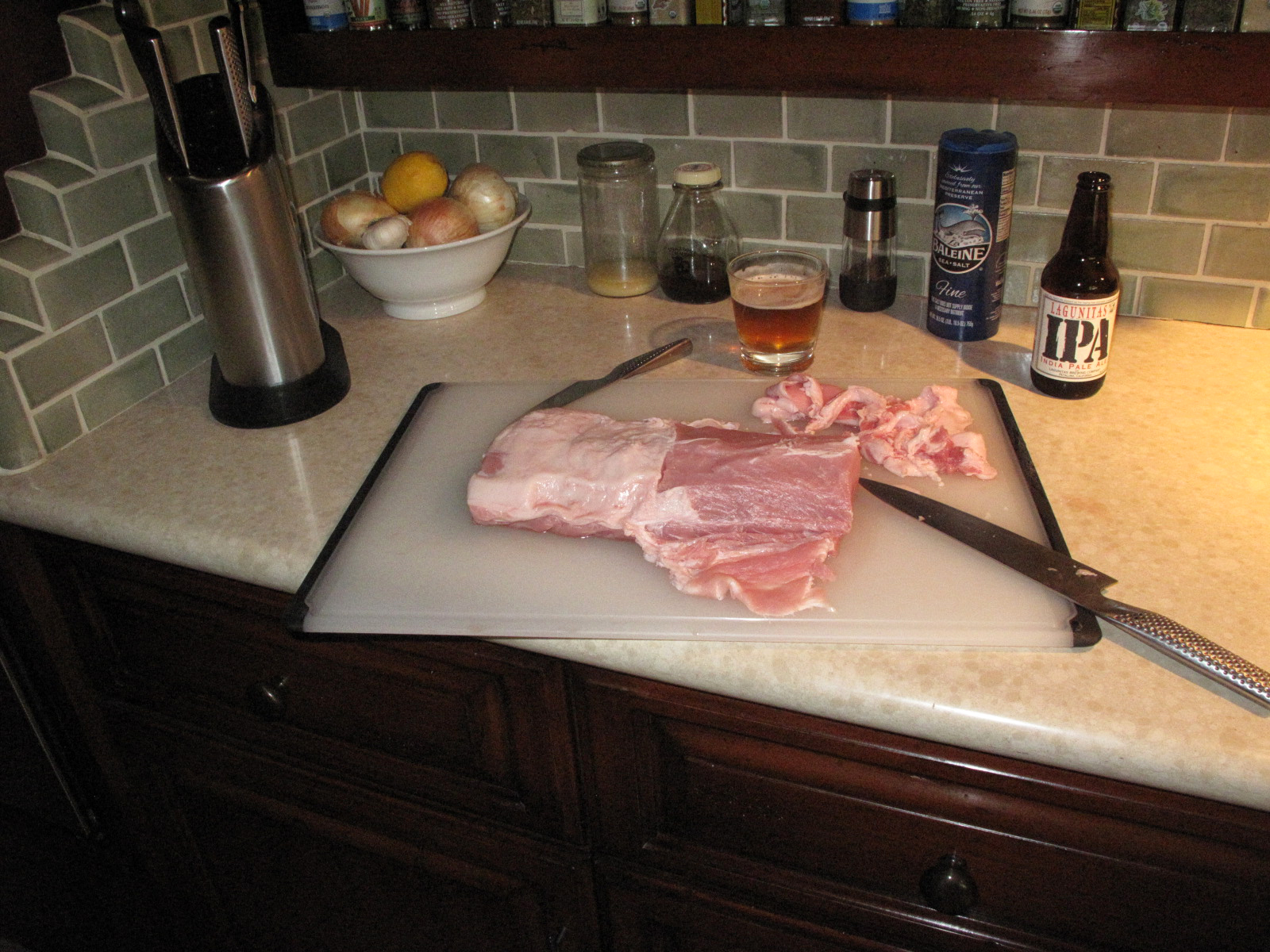 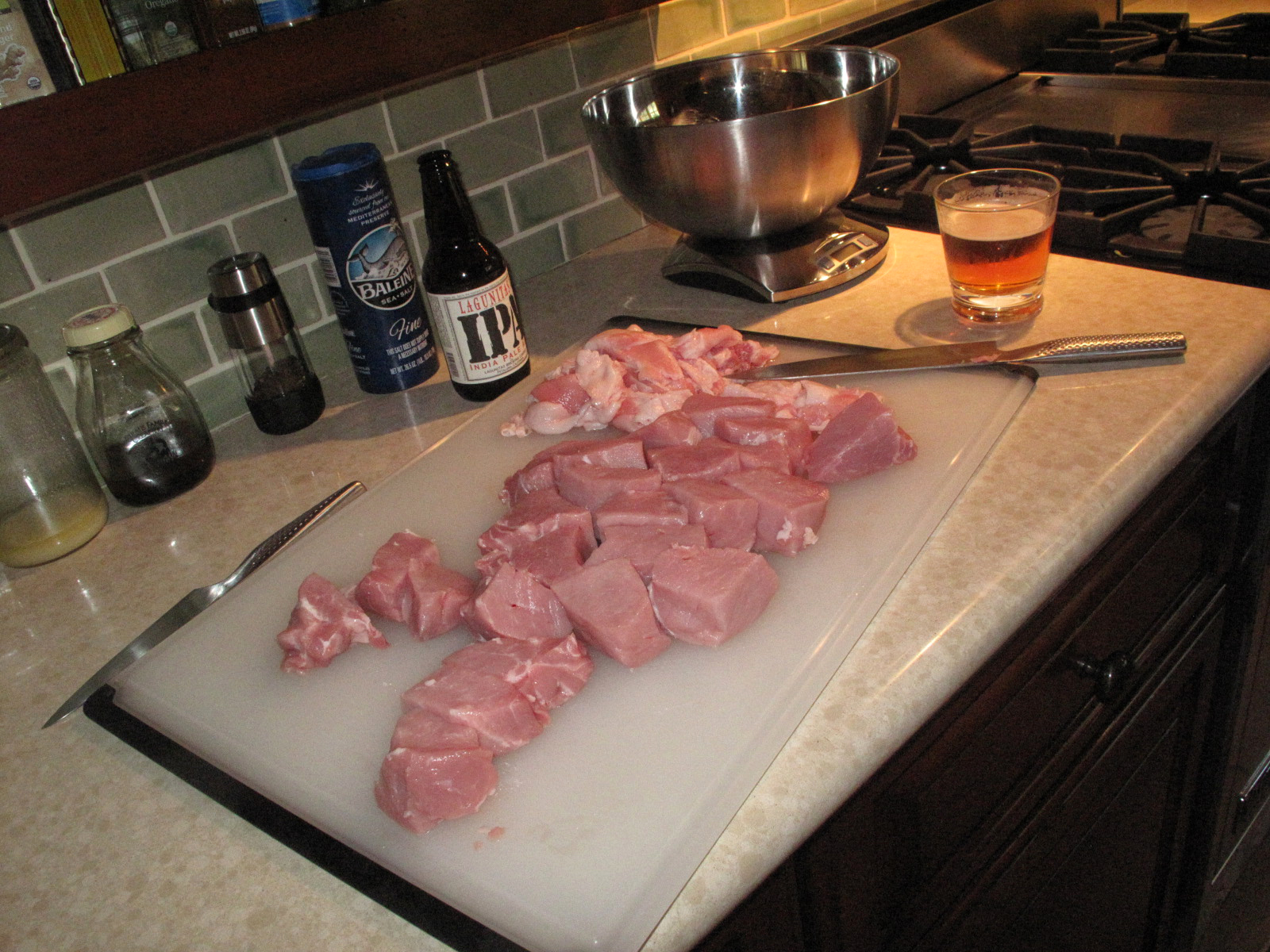 Simmer the bacon in a pot of water for about five minutes. Set aside to dry.

Get a few tablespoons of bacon fat heating in the frying pan and brown the bacon. When the bacon is brown but not crisp move it to the pot with a slotted spoon. Leave the fat behind. The meat is ready to go. The warm broth and the stew pot are on the right. Never put cold broth into a stew or casserole.

Brown the pork in batches and add it to the pot with the slotted spoon: 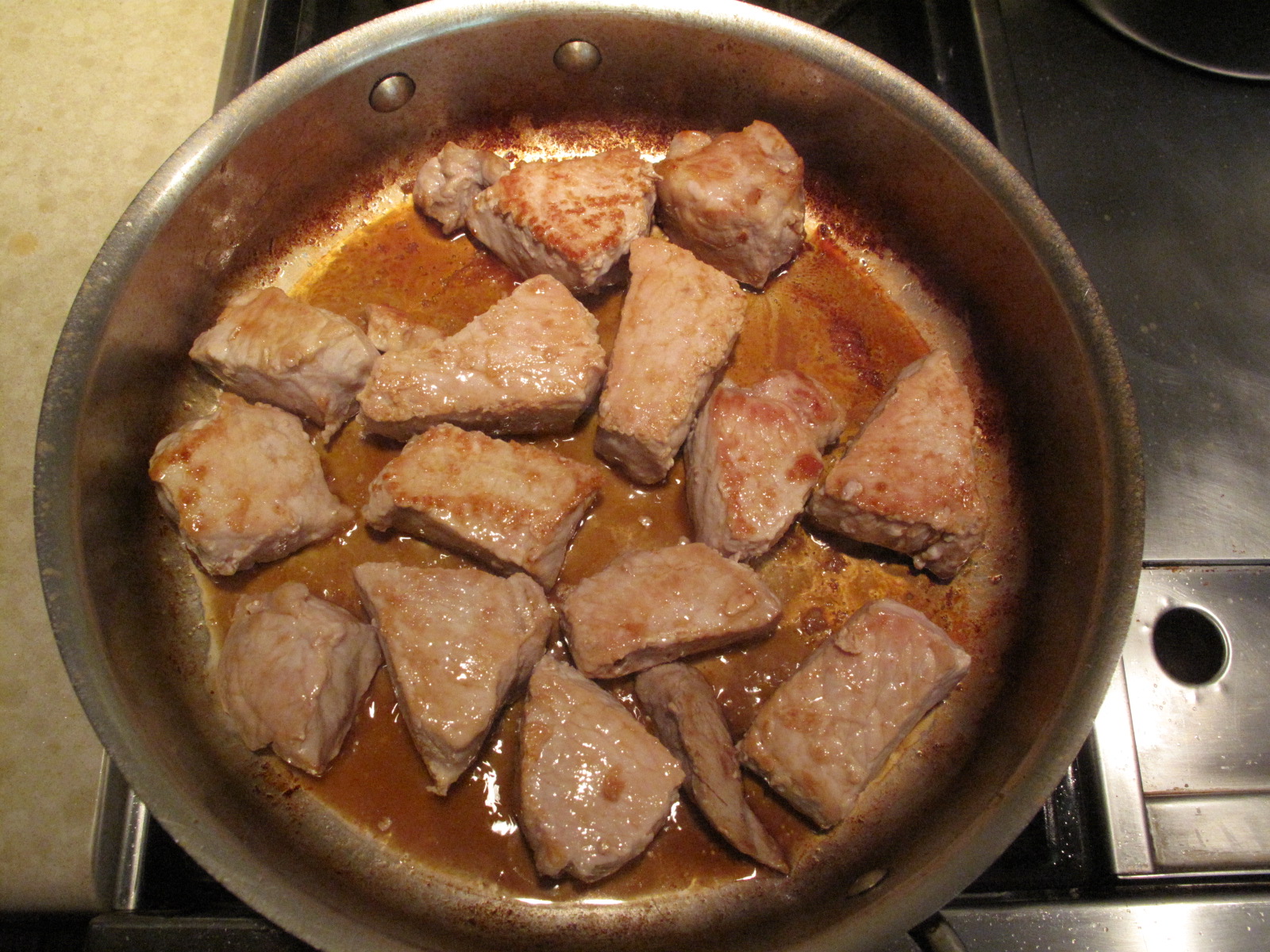 Cook the onions ’till translucent and add to the pot, again leaving behind most of the fat. 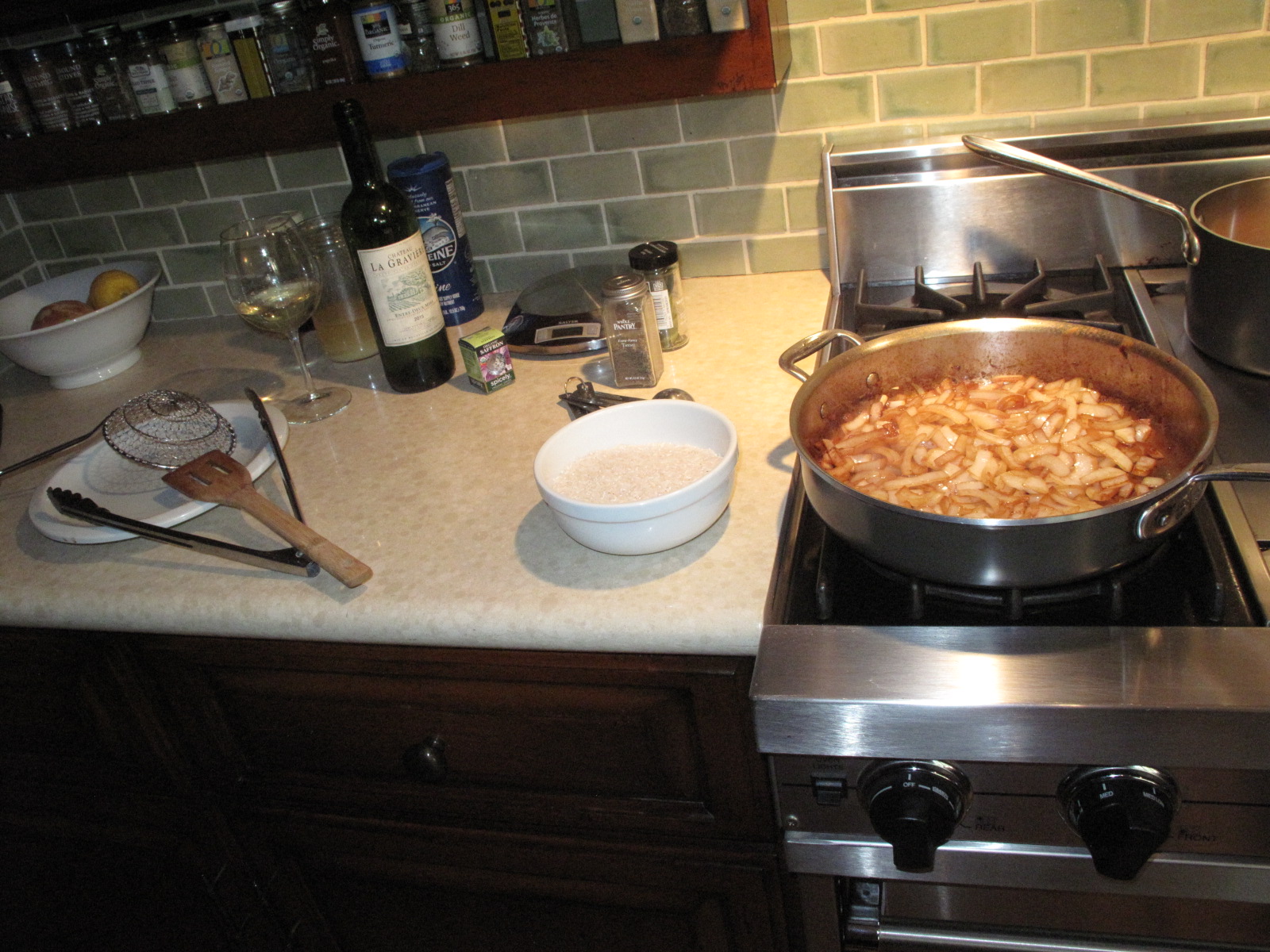 Add fat if the pan is dry. This means,of course, having some bacon fat on hand. I wouldn’t be caught dead without it. There are plenty of sources, baking your bacon is a good one. Rendering the trimmings is good too. I prefer using the oven just like baked bacon. Again, you’ll have your oven on for at least two hours, so get as many trays of bacon and trimmings in as you can. Pork belly is great for producing good fat too. Filtering the fat through cheese cloth is key. No bacon bits in the fat. They’ll go rancid and spoil you whole deal.

Fry the rice in the pan for a minute or two until browned and set aside for later. 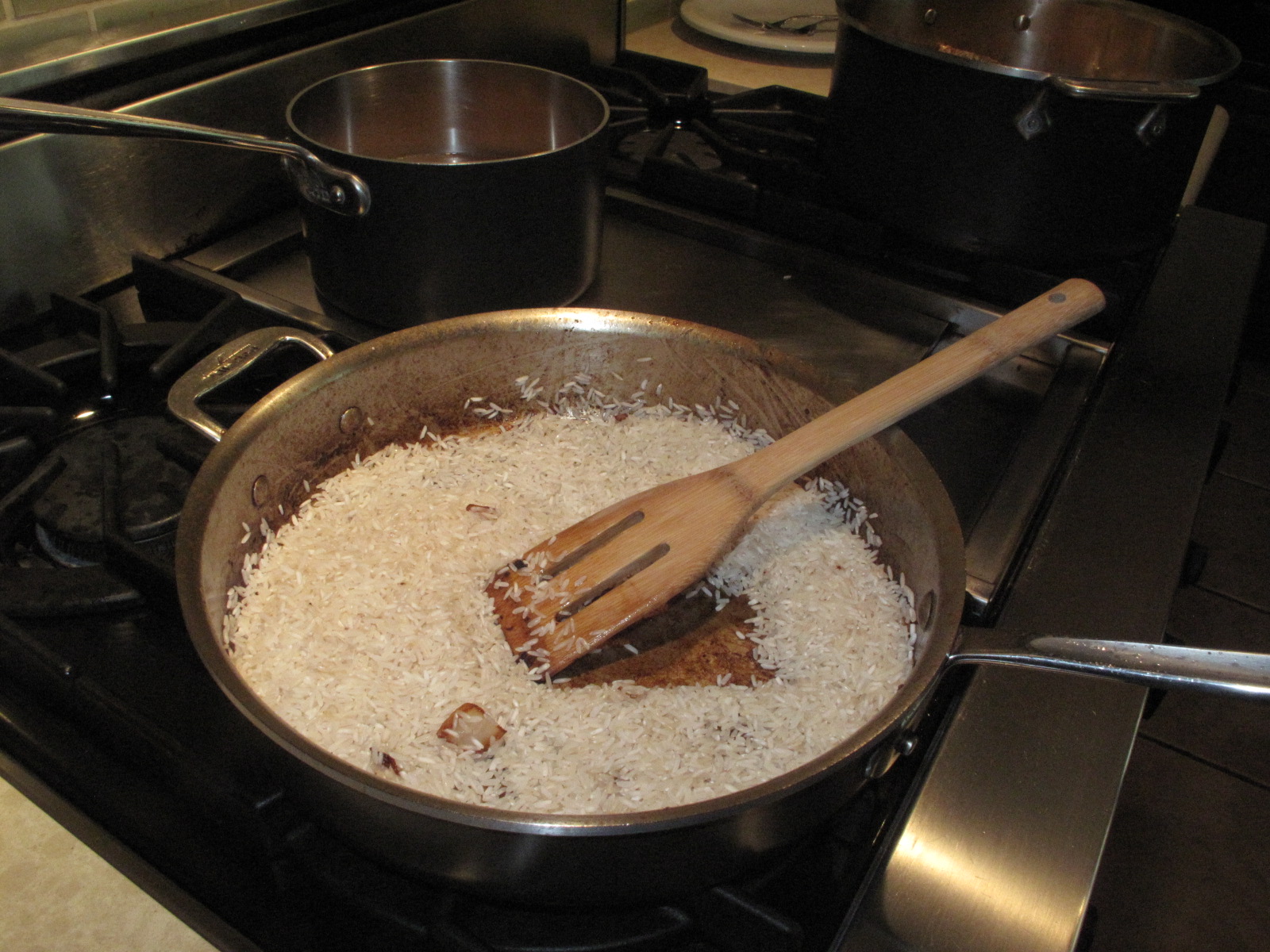 De-glaze the pan with a cup or so of the wine. A straight edge wood spatula is perfect for scraping all the goodies up.  The pan should be nearly clean. Transfer to the pot.

Add warm beef broth just to the top of the meat. Add 1 or 2 bay leaves depending on size. Push them down into the mix. Set pot, with lid, in oven for an hour.

Pull out the pot and mix in the tomatoes and spices, salt to taste. Back in oven for an hour, (hour and a half for beef).

Pull out the pot and mix in the rice. Bring up to a simmer on stove and return to the oven for twenty minutes. Do not mix the rice after the first time.

Bring the pot out and add warm broth or water if it looks at all dry. The original recipe says to stir in the cup of grated Parmesan now. I have found that this breaks up the meat and makes a mushy stew, so I set the Parmesan in a small bowl on the table and let each guest serve themselves. 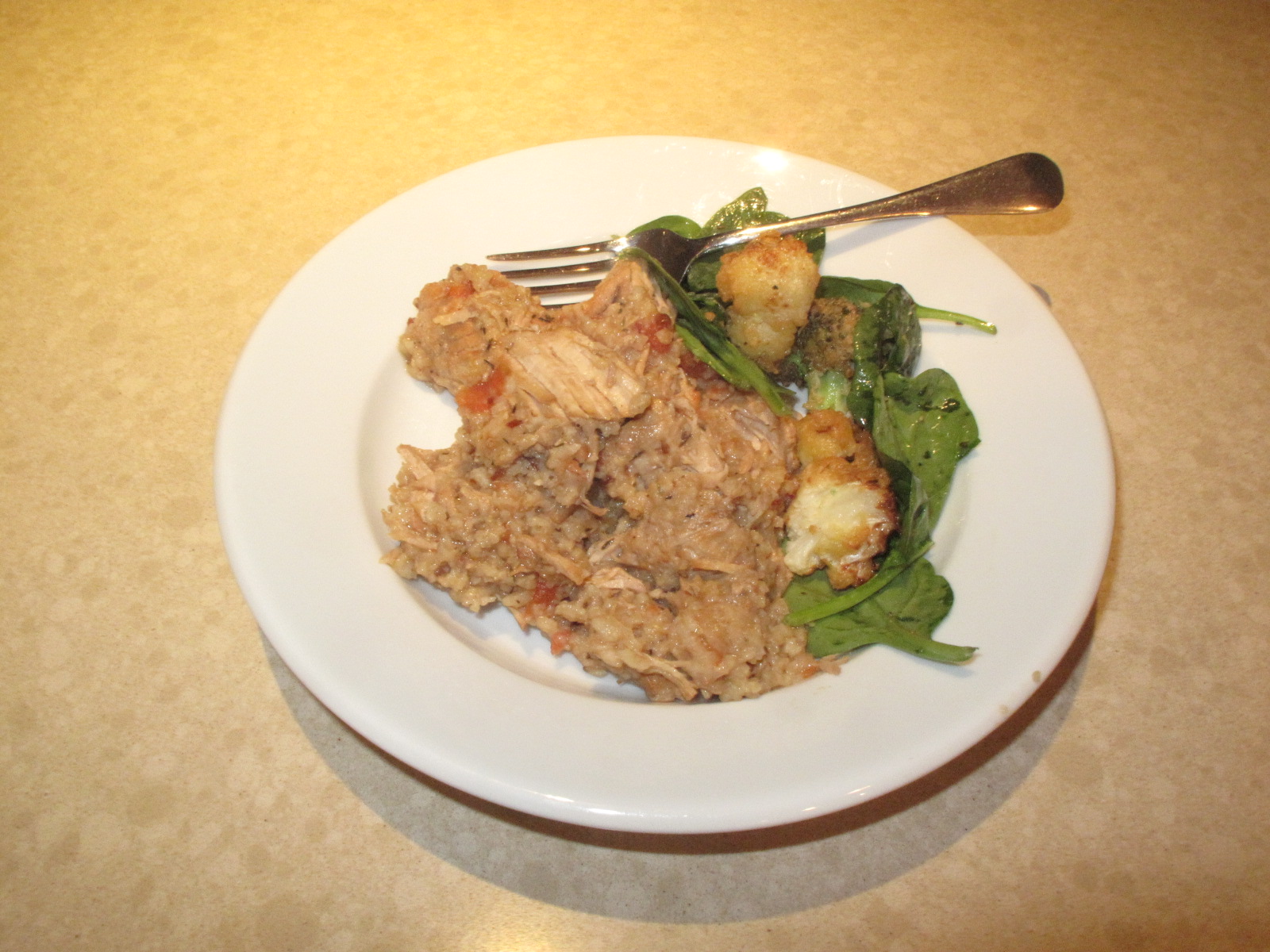 For the greens on the side, look here.

The trick to frying in olive oil is to get the temp just right. Heat the oil under medium heat until it looks hot but is not close to smoking. Test it by dipping a spare piece of broccoli. If it sizzles you’re good to go. Never get olive oil smoking hot.

Back to the stew, this recipe doubles well for bigger dinners and the leftovers are awesome. Like lots of stews it seems to get better over the next few days.

I like to prep the tomatoes and meat the day before. My brother in France insists that the meat be trimmed and cut, then allowed to rest in a glass or stainless covered bowl in the fridge overnight before cooking.

Waste not – want not. The trimmings from the pork can be rendered down to fat for future cooking adventures, just lay out the trimmings in a tray and set them in a 225 degree oven for at least two hours. Drain the liquid through cheesecloth to filter out any bits of meat. If the fat is clean you can leave it out on the counter just like your grandma did. Tip: Since your oven is already hot, turn it down and set the fat in to render when you pull out the stew. 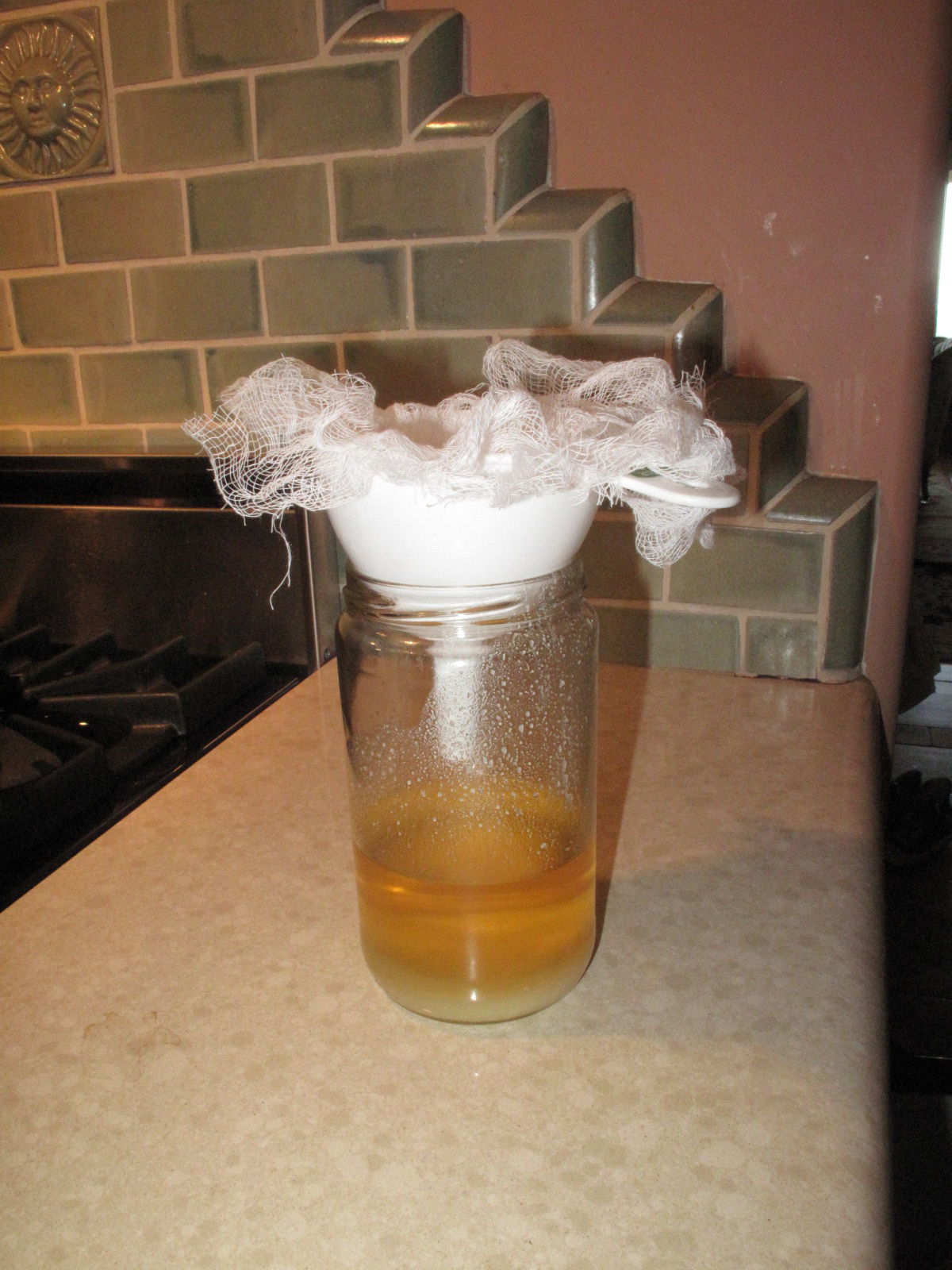 I don’t think much of pouring hot fat through a plastic funnel. Now I have a stainless one.