In 2008 my friend Kevin Daniels, a climber and a publisher of outdoor books, asked me if I would be interested in making a climber’s guidebook for The Needles. I thought about it, and I was confident that I was familiar enough with the area to do the project justice. “Give me two years”. I thought that was more than enough time.

I started work the next year. Finally, in August of 2016, the book went to the printer. 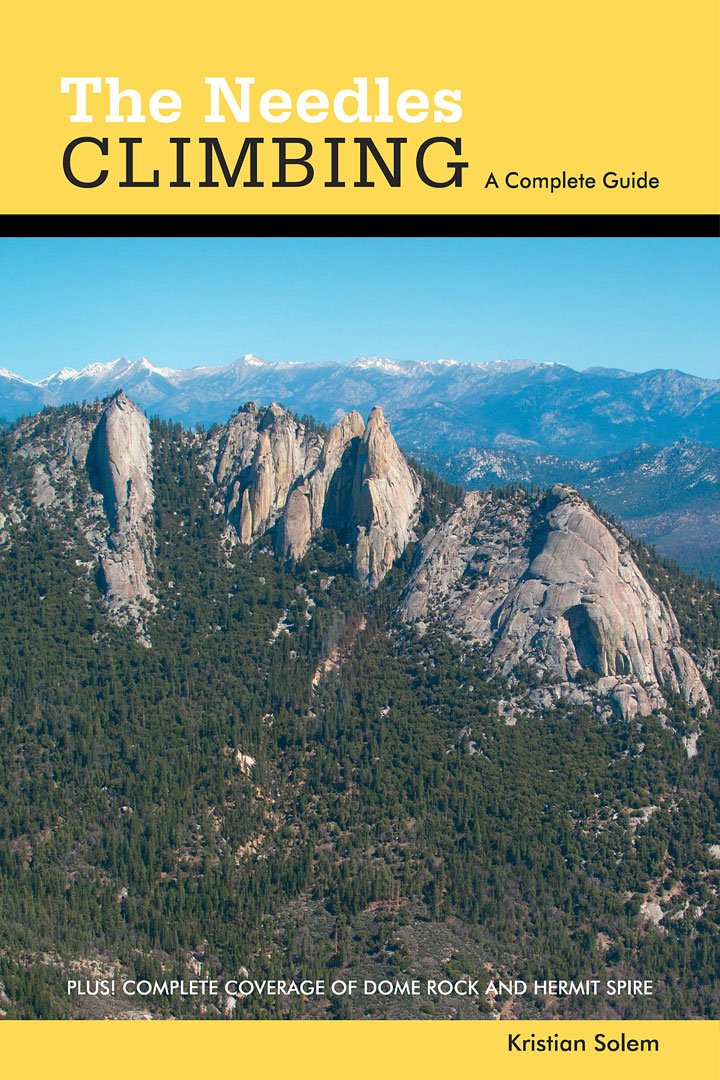 What took so long?  I spent lots of time taking photographs of the formations. I worked hard to get some points of view which climbers would not ordinarily see including aerials from a small plane. I collected stories and historical tidbits from Needles climbers who led the way. I researched the history of climbing at The Needles; many great climbers have contributed to Needles climbing by doing standard setting climbs. Then I set about creating accurate and sometimes entertaining written descriptions of each and every climb. The book also covers The Needles stately neighbor to the south, Dome Rock, and their sister crag standing alone to the north, Hermit Spire.

Why put so much effort into a project like this? It won’t be on any best seller lists, and lots of information about the area is available online. What can a book offer that the internet sites cannot? It can offer completeness and context.

I’m a history buff, and over a period of more than 50 years adventurous climbers have left us a rich history of accomplishments at The Needles. Early pioneers explored the wild granite spires without keeping accurate records. An occasional old piton, or a pile of stones on a summit say “We were here before you”. Beginning in 1969 with the efforts of climbers including Dan McHale and Fred Becky, climbing at The Needles was defined by the day’s best climbers setting new standards. I gathered stories, comments, and recollections from many of these climbers, and included them as sidebars or in route descriptions throughout the book. This is one way to put Needles climbing into context.

The book also features numerous action photos by masters in the field including Greg Epperson, Kevin Powell, and Jim Thornburg.

Another thing you won’t get from websites is a complete list and description of every climb at The Needles, Dome Rock, and Hermit Spire. Since these sites are built from the contributions of individuals, climbs which are rarely climbed for a variety of reasons get left out. My book details every climb which has been established at The Needles to date. Many of these climbs which have fallen into obscurity are terrific. So the book should entice climbers to broaden their horizons, to seek out adventure and do more than just the most popular routes.

These were my primary goals in making this book; to create a historical context, to include action pictures by top photographers of the sport (visual context), and to place the popular climbs into another kind of context: their surroundings. And of course it also has to be an accurate guide, a resource climbers can rely on.

I had to decide how much detail to offer. A guidebook is expected to show how to get to the area and where to camp. It should show where any given climb is, what route it takes up the rock face, and give a reasonably accurate level of difficulty. If a climb requires highly specialized techniques or gear, or is exceptionally risky, this should be made clear. Lastly, details of the descent can be valuable. These are the basics. I think that the names of first ascent parties are important information, others dispense with that.

Many authors go into great detail, providing lists of every piece of equipment, perhaps even where it will be used on the climb. Some books even tell climbers how to do the hard bits. I chose to stick with the basics in my book for a variety of reasons. The nature of Needles climbing is such that no two leaders will protect a pitch the same way, and different parties often belay in different places. And the easiest way to have errors in a book like this is to give too much information. The Needles offer adventure climbing, and I was not about to make a book which dumbs the place down.

Dome Rock and The Needles from the south. Photo, Kristian Solem